It seems you´re talking about mesh-gradients - not diffuse gradients.

Thanks for the suggestion. Can anybody please elaborate on this function, how it works in Illustrator and if you see room for improvement?

Here’s how it works:

Thanks for the video. Based on user demand we might add such a feature in the future. So far, we didn’t get a single request, though.

I must admit, this is really cool feature. I would like to have this. You don’t need to blur image to get this results.

Yeah, there are many features many different users want.

Unfortunately, the day only has so many hours, but we already have a huge list of improvements to process. Thanks for your understanding.

@christian.krammer is there any roadmap we can see, or beta version for testing?
It would be really interesting, this is almost like an open source project

We don’t have a public roadmap yet, as we are currently deciding in which direction we want to go and only show a roadmap when we are super-sure.

Usually, I do not try to justify my “feature requests”, I think that if they do not make you think “this is something we have to develop” by themselves, perhaps they are not so great ideas at all; or are completely out of your perspective for Gravit Designer, so that it would be useless to try to argument.
Forgive me, if I will break my “rule” here, but some coincidence in requests and opinions I read in the forum lately, together with your information here, that you are deciding about a new roadmap, made me believe it would be a moment to make a few considerations. Again, forgive me for daring to do so.
Perhaps one thing that you could consider are features that would not be very difficult to develop but are eclectic in its usage.
And this is why I chose this topic to make these considerations. By itself, this feature (diffuse gradients) would perhaps not justify to be developed before many others that people are asking for a long time, but, if I can understand it, it is only a “gradient of opacity” of a color. This opacity gradient, I believe, has immense potential and would not be difficult to achieve: it would only take the gradient tool, exactly as we have it, and adapt it to control the opacity of any object, a color fill, but also the strength of effects, etc.
This is why I hastily sent my ever delayed “feature request” about photographs - Some desires about Photos (see point 2 there), because I had been imagining something like that for a long time. Imagine all the things we could do with basically the same algorithms… (hope this term is well used here; as you know, I am no tech wizard).
A second example that would fit this concept of using the same “algorithms” for different tools/tasks, would be the ones of the Bucket Tool. Not only is it, I believe, a basic feature that every beginner would expect to find, but I also believe that the same procedure described by “obtusity” here - My first look at Gravit Designer, with which we can obtain some kind of a vector bucket, could also be used to define a path not to paint but as a way of achieving a kind of a “merge” (as I explained there, this would mean to lose contact with the initial paths but would define a new straightforward path; very helpful, when making complex merges with holes and borders that are not easily/at all achievable with the present merge feature). Of course, if the Bucket Tool would make use of all the paint options of Gravit Designer – fill, gradients, texture, etc., but filling the whole area or only a “halo” inside or outside the border/limit of the area, we would also gain a very versatile Contour Tool. Everything sharing much of the coding work.
Still a third example would be all the things we could do with a more versatile border tool. (I will try to find time to collect some of the many requests here that are related to borders and a few of my views about it).
Sorry for the long text and so much explanation.

@Letranger Thanks for the suggestion. I really appreciate the time you put into your messages, but unfortunately it’s not that easy. At some point, we basically need to “stop” accepting feature requests and process what we already have on our list. Even now, it’s massive and we need to highly prioritize and it what fits our vision of Gravit Designer. Of course, every user has different wishes and wants to see feature A, B, C and D prioritized, while another user would love to see feature E, F, G and H. It may be hard to understand why feature A makes it into Gravit Designer, but not feature E, although it’s so much more important in her eyes. Believe me, these are very tough decisions, and it’s hard to say “No", but in the end it’s inevitable in most cases.

Currently, our number one factor for new features is user demand. If a critical mass of users is suggesting something, we will consider it. And then we see where it might fit it. We are also basing many considerations on our own experience. So, for this particular idea – mesh gradients – I will note it.

For your other ideas, you know that most of them are already on our roadmap, so they might come sooner or later.

I hope it’s easier to understand our situation now.

@Jerome: What do you think about these? 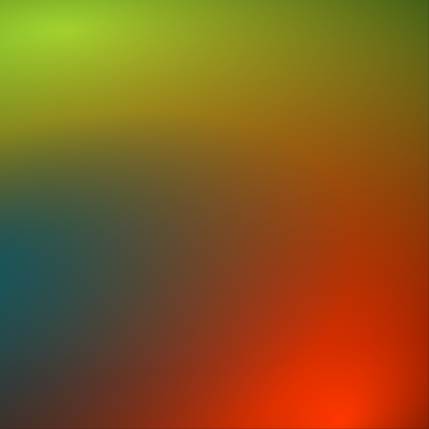 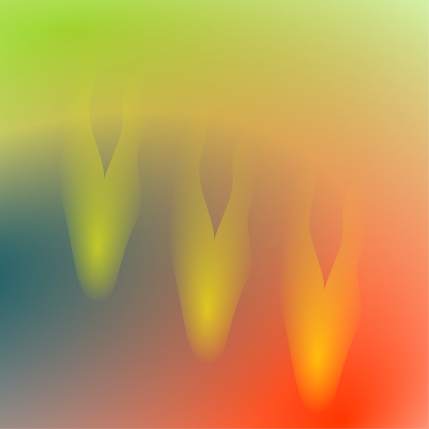 Two quick attempts with “my” “new” OVERLAY effect. If this is what you were looking for, please look at Chistian Krammer’s video on how to do it here: Some desires about Photos

@christian.krammer:
Well, the overlay seems to me to work exactly as I imagined it, both with photos and also shapes/paths. A most quick fulfilment of a feature request. I wonder if it is, technically, really only an “opacity-gradient” as I thought. Would you be so kind to ask your coders? If only we could define a center area in the radial gradient where the gradient would not just start (as we can in both ends of the linear gradient), then it would be perfect (or have I missed something here, also, and we can already do it? That would be great). And I say it once more (forgive me), if we could apply a gradient to the amount of blur, pixelization size, etc. many of Gravit’s effects and filters would become all immediately a new world of creativity, (and I do not believe it would be so difficult).

For your other ideas, you know that most of them are already on our roadmap, so they might come sooner or later.

My intention here was to try to look to the already existing feature requests from a different angle of view, hoping that it could help you in the difficult task of deciding which to approach first. I know this is not what I am supposed to do, but, as many of us here, I feel member of a community and we like to contribute. So, I thought that this holistic point of view of feature requests could help to make sense across so many requests and also suggest a way of achieving more features of less work: planning and developing them integrated. But my knowledge about all the requests and implications is very limited, I know, and I am certain you will decide to the best.

@Letranger With “opacity-gradient” you most probably mean an “alpha mask”, something that the Overlay effect is already doing. But maybe I don’t know exactly what you want to achieve. Do you have a specific example?

Again, I’m not sure what you mean, but if you would like to change the position of the gradient, that’s already possible: https://cl.ly/0v2J3P3D3H04.

And I say it once more (forgive me), if we could apply a gradient to the amount of blur, pixelization size, etc.

Do you have an example what you would use that for, so that I can better understand and prioritize it?

Currently, our number one factor for new features is user demand. If a critical mass of users is suggesting something, we will consider it.

Time for a roadmap voting system

Will probably come later this year.

Sorry for the delay, a little time at weekend is the best I can do lately.

But maybe I don’t know exactly what you want to achieve. Do you have a specific example?

With this question I only wanted to achieve a better understanding of things, learn a little more… What I already did, it’s called a mask, in this instance applied to the alpha channel, great, thanks.

if you would like to change the position of the gradient,

Notice the larger middle area with “pure” yellow, no gradient applied yet. I figured it out this time, I really have to go through the tools I have already tried to explore again, as there seems to be much more (for me) to discover. Another quick fulfilment of a “feature request”, I’m feeling lucky.

Do you have an example what you would use that for, 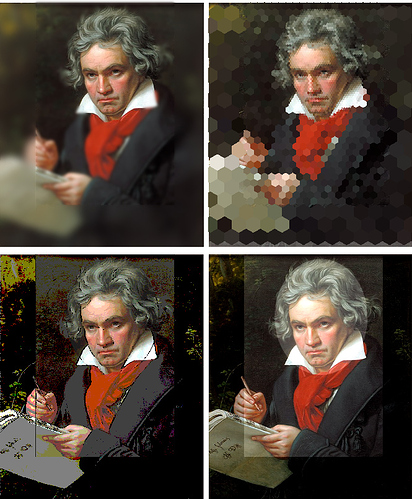 I made my own “3-step mask” and applied it to the “Radius” of the Blur Effect; the “Scale” of the Hexagonal Effect; the “Quantization” of the Toon Effect; the “Brightness” of the Color Adjust Effect.

@Letranger, sure you can do that now with the Overlay effect and control of the stop points in a radial gradient. 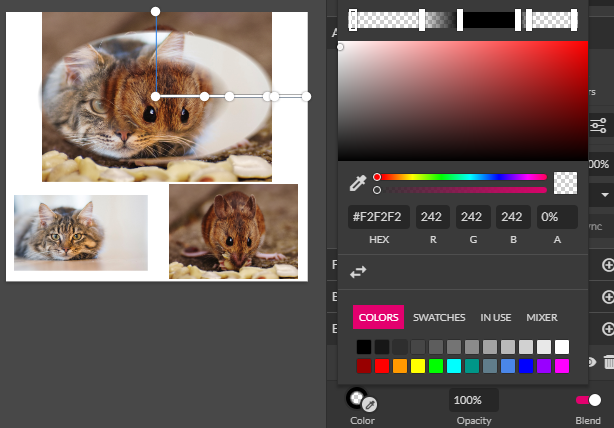 Regarding your effect masking: 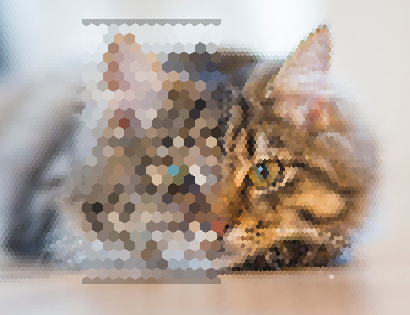 [Images from the fine photographers at Pexels]

sure you can do that now with the Overlay effect

Yes, that’s why I was so happy, but I did not explain why. Having been led to discover that the “Overlay” effect really does overlays (as a non-native-english-speaking beginner I did not came to check the “Blend” option and so I put the “Overlay” effect aside as something of no interest) and now having also discovered how to better control the various “gradients”, finally I am in the position to make the photo overlays I have been wanting for months. Good that you show here exactly how to do it, so that some other beginner like me has not to wait so long to come to it as I did.

Regarding your effect masking:

About the “effect mask”, I am not so sure to have understood what you mean. The examples with the Beethoven picture were achieved exactly as I understand your instructions, but I do not get how I can apply a “gradient-mask” to the effect as is my wish. I simulated a “gradient in 3 steps” with it, just to demonstrate what I really want to achieve: a continuous changing of the parameters of the effects using Gravit’s gradients as “masks”, as we do with the “Overlay” (e.g. Beethoven’s face with no blur and then a continuously increasing blur).