How to conclude my work (performance issues)

I’ve been the last couple days drawing the logo of my band . The program became very very slow at doing tasks by the middle to end of the job. Now that I finished the drawing I want to apply union to all the letters só I can have a single border over it all.
I was applying it letter by letter but when I reached the 4th (of 6) the task can’t be done anymore.
The desktop software gets blank after like an hour doing it (I tried letting it open overnight and still blank), and the web app gets an error at the page.
I would like to know if there is some sort o tweak that I could do in order to make things easier to the program or even any other program recommendation that I could finish my work.

Curious things that I noticed while trying to do this last step:
Web app performs much better than the desktop software, like 5x to 10x faster (totally wouldn’t guess that)
Both don’t use my gpu and use at maximum 35% of my cpu (shouldn’t it be using my gpu to draw things?). I already tried opening with the nvidia and the integraded one, both don’t work.

Edit.: Concluded the union on another software, union made in less than 3 seconds, brought back the svg because GD interface is much better.

The webapp error says: “out of memory”, but there is a lot of ram free in my computer. 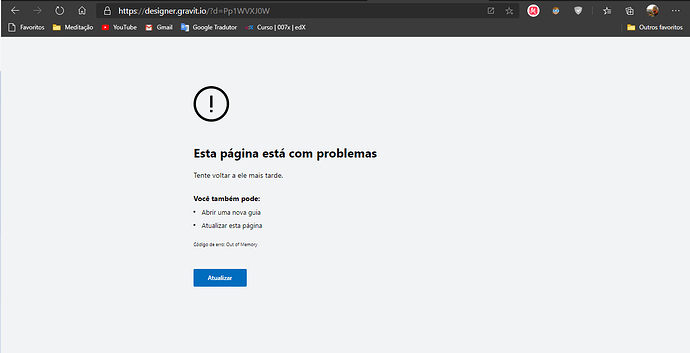 It is not about the memory you have available on your RAM but the amount of memory available from electron.