I decided to give Gravit a try since I don’t want to limit myself with just one software. I’m a longtime Illustrator user so i’m very familiar with that software and can draw a good comparison. I thought I would try recreating my own personal branding and logo in Gravit as a good way of testing out its features.

So first thing’s first. I started with the Pen Tool. And right away I can really appreciate the built-in guides that automatically show when moving or aligning paths. Oh, I also forgot, i’m a proficient AutoCAD user as well. I don’t know how many people here know CAD. But the tracking feature in AutoCAD is essentially a very, VERY comprehensive and powerful version of vector software’s automated guidelines that show on-screen when drawing or aligning. I actually jumped the gun there previously and forgot to mention I first pasted my logo in its plain state from Illustrator. It ends up being a raster image instead of reading in as a vector path/shape, which I wasn’t expecting. So I simply used that image as a reference to draw on top of. I had a hard time finding a Lock option to lock the image after changing its transparency. So I ended up simply drawing and looking at the image of my logo. Converting the image to vector also worked. For the most part. Some lines ended up being wonky and crooked. I tried editing paths but wasn’t sure how.

So here is the first snag I hit.

I drew part of my logo by using the automated Guides and flipping/copying. As you can see in this screenshot, the fill doesn’t apply to the entire shape as it’s apparently not one? That was my first assumption. So I quickly found the Join Paths command. It didn’t seem to do the trick. I can also see that on some path endpoints, it shows as two intersecting lines with each of their endpoint caps sticking out. Even though down to the endpoint path information, they are connecting. You can see that in the second image. Also, to make things more confusing, when selecting the shape, the path actually shows as one, as seen in the third image. I was hoping for a tool similar to the Shape Builder Tool in Illustrator, but unfortunately that’s not the case. 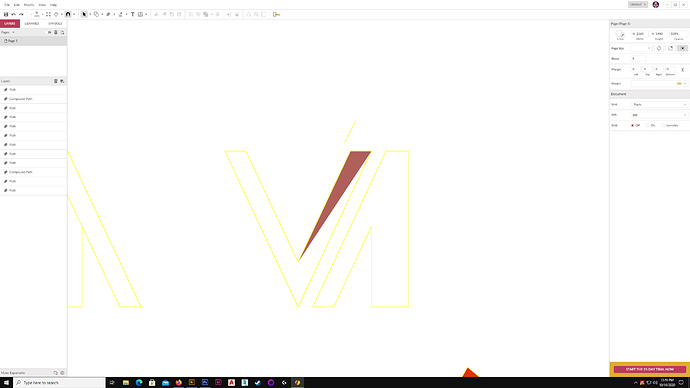 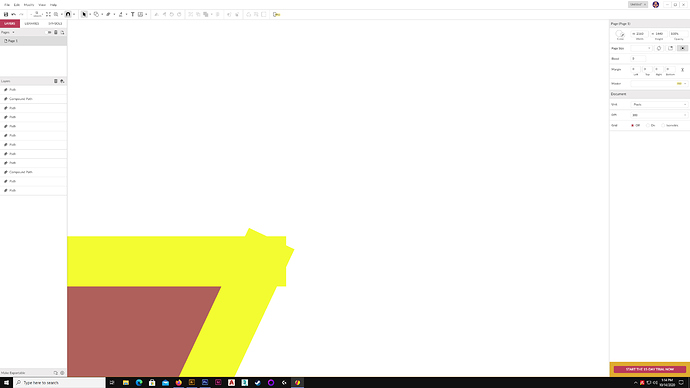 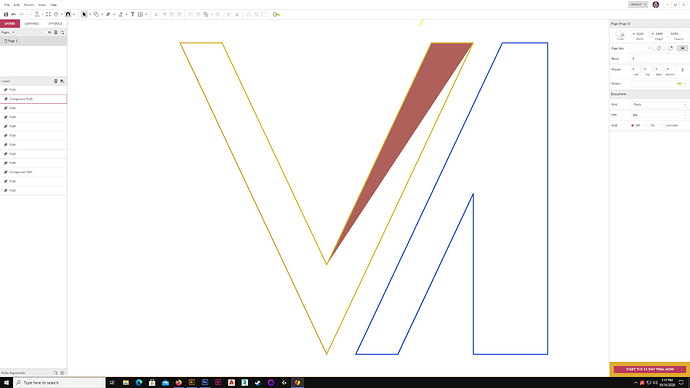 There seems to be no clear way of ensuring that all paths are connected as one. It’s really giving me a hard time.

Hmm… not really sure how to fix the problem, but I do know how you can fill up the V. Apply the snap to anchor points in snapping, select the pen tool, and draw one shape over the V. Then color it. Maybe try providing the .gvedesign file so I’ll see what I can do?

It’s actually a good solution. To the visual problem, anyway. But when it comes to the functionality of the software and how it works, that’s mainly what’s going on. Give it a try. The paths aren’t reading as one for some reason. Despite there being a Join Paths command it isn’t working.

Sorry for the wait, I was a bit busy. This is the problem: Your V is not a closed shape. I will try to find a way to connect those points since I don’t know how to do it myself. If you don’t want to wait you can search the web.

I had a quick look. The V shape is indeed not a closed shape. It is made up of 6 separate paths joined together, you can see this from your second image in your original post where you show the ends overlapping

I would suggest the easiest way to solve this would be to redraw the V shape using the pen tool and a continuous path closing the shape with the last click. Then the shape should fill just fine and your corners should also look better

Also, when you are having to create a complex shape with multiple paths as well as ‘Join Paths’ there is also ‘Connect Path Points’ which do work differently

I would suggest the easiest way to solve this would be to redraw the V shape using the pen tool and a continuous path closing the shape with the last click.

Apply the snap to anchor points in snapping, select the pen tool, and draw one shape over the V.

I was replying to the whole thread, specifically to the original posters problem

This topic was automatically closed after 180 days. New replies are no longer allowed.