First of all, thank you for Gravit Designer!
I’ve only started using Gravit Designer this week. Several times, I have opened an .eps file with an image consisting of a couple of paths, flattened it and tried to add a background and/or inner shadow / drop shadow, plus save / export the result. Unfortunately, I don’t know anymore which action have I done before getting this exception but I hope the message shown can help you anyway: 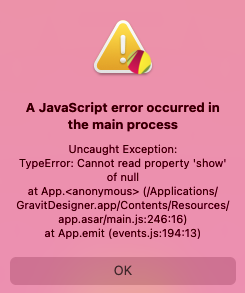 Were you able to save the document?
I´m on the same macOS (M1 MacMini) but never caught an JavaScript error so far.

No, I wasn’t. Luckily, I haven’t done that much before the bug occurred.

Under Edit->Settings… you can Enable auto-save - just in case you didn’t know.

It should be enabled by default. Usually, when you start a new file, Gravit asks you if you want to save it or proceed without saving it (not recommended).

That setting is only for files saved to/synced with Gravit Cloud - I supposed it is then only autosaved to the cloud. For my work we are not allowed to save to external clouds.

This issue should be fixed on this version.

I´m a bit confused: the download from above stated: 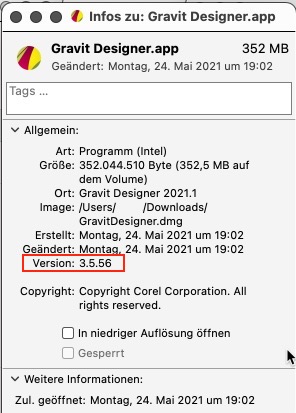 Edit: I found the culprit:

Guess which one is the latest without checking Info?
Now Welcome screen says correctly version(2021.1Mac beta) but info is: Version 3.5.56, 24.May 2021
and the new message appears regarding save locally.

(the integration of “Unsplash” is very nice)
Cheers

Thanks for the feedback.

I’ll let the devs know about the version, but this is a beta version so it will probably be corrected when it turns into a production version.

In fact, the issue that should be solved was the one reported by @lekkii about the JS exception.

About the unsplash, do you mean the “load more” fix? It solves an issue of loading tons of images and crashing the app.

About the unsplash, do you mean the “load more” fix? It solves an issue of loading tons of images and crashing the app.

I didn´t used it in project but like its implementation. “Loading more” is adding at top - so you need to constantly scroll up instead of down and down again to more and so forth - this way you´re viewing all content multiple times. I think it´s more intuitive+productive to load more at the end of the list - no?
Autosave is not on by default. And I got an error message “not enough memory to save” each time I try to save locally. Save was successful though. Autosave seems meant for cloud only use. Memory error message appears here too.
PS: one thing. Quitting GravitDesigner don´t kill the indicator(black dot und the icon) of the app in the dock. I have to close it in the dock a second time.

The unsplash feature is pretty old but I’m happy you like it. About the “load more”, don’t you see it this way? https://share.getcloudapp.com/bLukDd2K

Autosave only works on files saved on Gravit Cloud.

" And I got an error message “not enough memory to save” each time I try to save locally. "

This should be already solved on this version.

I’ll pass the feedback. Are you using BIG SUR? What exact version?

This is really odd. Thanks for reporting.

So I´m the only one with this “revers” experience? Strange. Maybe should “uninstall” reinstall Gravit?

Nope, I have edited my comment because I was able to reproduce it and I’ve already notified the devs about it.

Thank you so much for checking+confirming. Glad I´m not the only one.